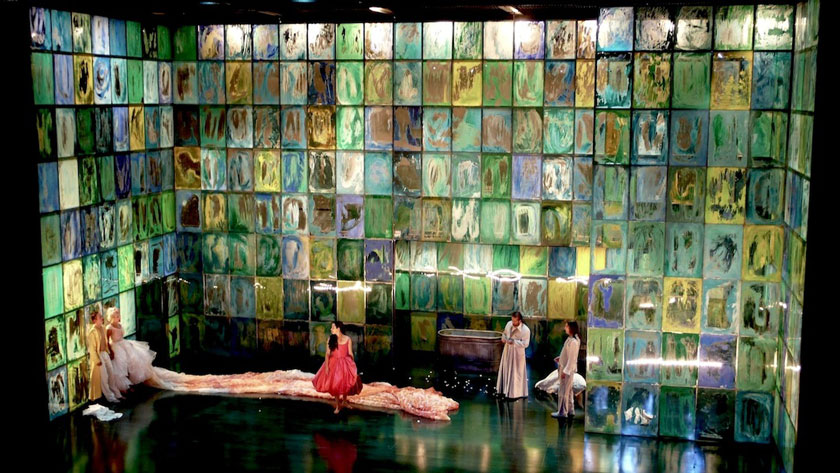 Set design for Marivaux’s “The Deception”

Named outstanding set design, Twin Cities theater, Minneapolis Star Tribune 2007.
Chosen for From the Edge, the U.S. exhibit at the Prague Quadrennial of Performance Design and Space 2011.
From the Edge was presented in 2013 at La MaMa La Galleria, New York and 2014 at Bakhrushin Theatre Museum, Moscow.

“In a dramatic moment when the rippling green curtain drops... you are wowed by the wondrous set of painted plexiglas panels created by visual artist David Coggins. His greenish, daubed-glass chamber for the play is breathtaking... a stunning visual treat.”

“The cast performs without props on a bare stage. Behind them looms David Coggins’s majestic box set: three walls of at least 150 glass panels, each smeared with yellow, green, or blue paint, and with enough gender-sex imagery for a Rorschach buffet.”

“Designer David Coggins’ walls or individually painted Plexiglas panels are an apt contemporary analogy to the overwhelming (and truth-obscuring) interiors of a Baroque palace."

“When a curtain falls away to reveal David Coggins’ huge set of painted Plexiglas panels, the eyes blink at its harsh beauty and starkness.”